From Skaftafell to Vík – Where to stop and what to see

The area between Skaftafell and Vík is maybe one of the most underrated areas in Iceland. A lot of people drive through there without stopping even though there are gorgeous places to visit. There are countless waterfalls, massive black sand plains, one of the largest lava fields in the world, beautiful basalt columns and so much more. We have made this list of some of our favorite spots from Skaftafell to Vík í Mýrdal.

First thing you will pass driving west from Skaftafell is Skeiðará Bridge Monument. The two twisted metal girders were a part of  the longest bridge in Iceland. The bridge was built in 1974 and was the last missing piece to finish the ring road around Iceland. At that time the bridge was considered an “engineering wonder” in Iceland, as it stood on deep sands and went over an ever changing riverbed that was frequently hit by jökulhlaups (glacial outburst floods).

In 1996 there was a volcanic eruption from Gjálp, which is underneath Vatnajökull. For two weeks water from the melting ice flowed into a subglacial lake in Grímsvötn. Almost 5 weeks later a powerful jökulhlaup burst out, flooding the vast sand plains of Skeiðarásandur. The flood’s maximum flow was about 45.000 m³ and it brought house sized icebergs with it. The massive icebergs and power of the waterflow completely swiped away one of the bridges on the sands and destroyed parts of the bridge over Skeiðará. Skeiðará Bridge Monument was left there as a remainder of the Icelandic beautiful, but powerful nature. 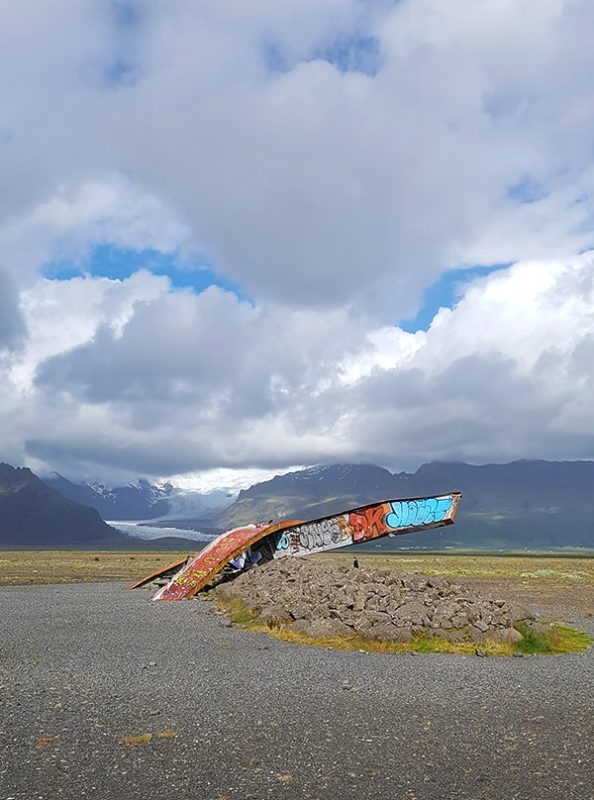 Driving west from Skaftafell you will be passing Lómagnúpur, one of the most photographed mountains in Iceland. It is very hard to miss, because it is the first thing you will see after approximately 25 minutes of driving through black volcanic desert. Lómagnúpur stands 764 m above sea level. Subglacial eruptions formed this giant some millions of years ago. For a long time it used to stand on the coast line. Therefore the power of the ocean and rising land has shaped it, giving it it’s stunning look. Many little ponds and puddles surround it, making it a perfect subject for photography. 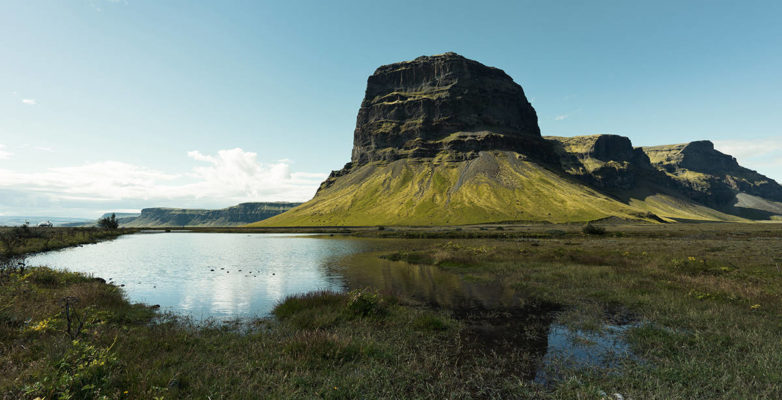 Dverghamrar are stunning rock formations about 10 km east of Kirkjubæjarklaustur. These interesting looking formations are made of basalt columns. These types of columns happen when lava cools slowly and contracts. As it contracts it breaks into beautiful geometric patterns. People used to believe that there were supernatural reasons for how they were formed. The name Dverghamrar means “Dwarf cliffs” as it was believed that they were the homes of dwarfs. Even though Dverghamrar is just off the main road and is incredibly beautiful and picturesque it is usually not a crowded place.

Foss á síðu is located very close to Dverghamrar and can even be seen if you are standing between the rock formations. This waterfall is coming from a lake on top of the mountain called Þórutjörn. The lake is named after a working woman called Þóra who was coming from the nearby farm. Þóra was tricked by a Nykur and followed it into the lake. Þórutjörn can be visited through a steep hiking path. The waterfall flows in a thin stream that can almost disappear during windy days. The parking lot is right next to the main road so this is ideal for a quick stop.

Stjórnarfoss is a waterfall just a few minutes outside of Kirkjubæjarklaustur. This spot is perfect if you are looking for a quiet picnic place away from the crowds. The River Stjórn is coming down from the highlands (you will be crossing it if you’re going to Laki) through a canyon into waterfall Stjórnarfoss. The surroundings are beautiful and there is even a campsite nearby called Kleifar, which used to be an old regional assembly site.

Systrafoss (Sisters Fall) is coming down from Systravatn. The water comes down in two streams from the lake. The names of both the waterfall and lake are inspired by nuns who were using the lake for bathing. Because between 1186 and 1550 there used to be Benedictine convent in Kirkjubæjarklaustur. Systravatn itself is involved in quite a few legends, so if you are a fan of folklore don’t miss it, as well as the waterfall. A scenic hiking trail that only takes about 20 minutes leads up the mountain to Systravatn. It is possible to continue on the hiking trail further, all the way down to Kirkjugólf 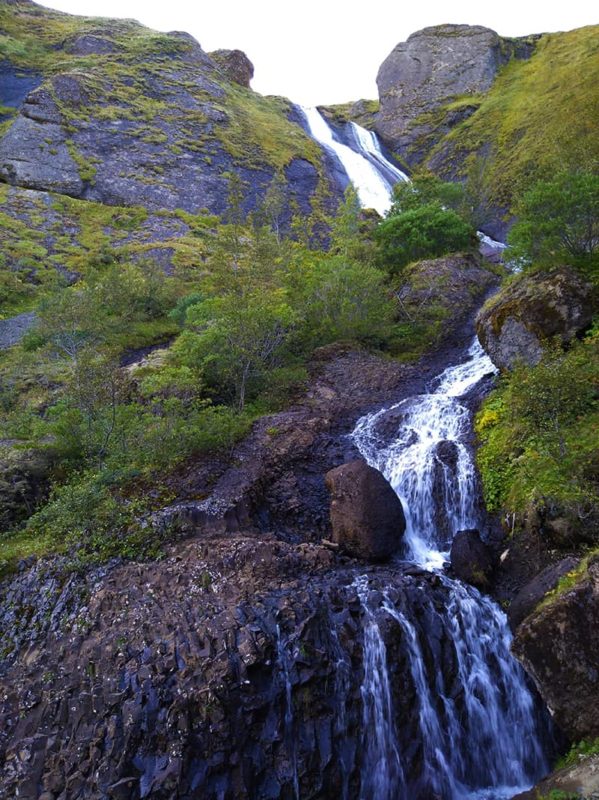 Kirkjugólf was believed to be old church floor, because of the perfectly shaped hexagonal tiles. After some investigation it turned out, that 80 m² basalt floor is simply art of nature. Basalt columns had been shaped and eroded by glaciers and waves into looking like a man made floor.

Fjaðrárgljúfur is a picturesque canyon about 15 minutes outside of Kirkjubæjarklaustur and just a few minutes drive from the ring road. Fjaðrárgljúfur is about 2 km long and 100 m deep. At the bottom the river Fjaðrá flows towards the ocean creating a magical environment you might recognize from Game of Thrones or Justin Bieber’s music video, which was one of the reasons behind the rapid increase of visitors of the canyon.

There is a hiking path from the parking lot leading alongside the edge of the canyon with several viewpoints. Always stay on the marked path and don’t climb over the ropes just to get a better photo. The ropes are there to protect the visitors as well as nature. You can also take a more adventurous way and explore the canyon from the bottom by walking in the riverbed.

Last two years (2018, 2019) the canyon was closed for tourists from March to June, so nature could recover. If you are travelling at this time of the year you can check on safetravel.is if Fjaðrárgljúfur is open. 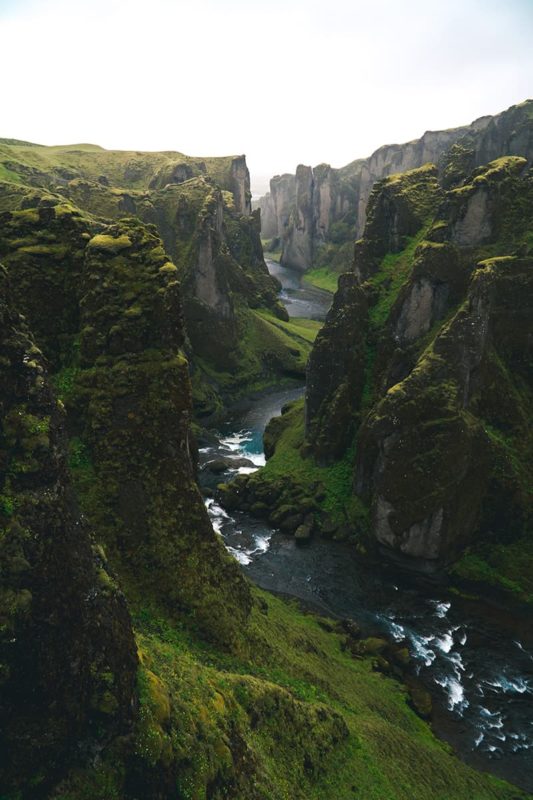 Eldhraun is one of the biggest lava fields in the world. It was created during the Skaftáreldar eruption which occurred in 1783-1784. The lava flow from Laki craters covered 565km² of land. It was one of the most poisonous eruptions in modern history, killing between 50-80% of the domestic animals and over one fifth of the Icelandic population. It also had widespread effects around the world. Some historians believe it may have caused the deaths of 1-2 million people around the world.

The lava in Eldhraun is on average 12 meters thick with many caverns and crevasses hidden under the covering moss. You can find over 600 types of moss in Iceland (from estimated 35000 in the world). The most common in this area is racomitrium lanuginosum (woolly fringe moss). Same as all Icelandic moss, the moss at Eldhraun is very fragile, it takes decades for it to recover. Always stay on the path when visiting this place.

Hjörleifshöfði is 221 m tall mountain rising from the black sand plains of Mýrdalssandur. It is only 15 minutes drive away from the small town of Vík.  Hjörleifshöfði is a place of great historical importance. You can find mentions about it in Landnáma – the Book of Settlement of Iceland, as well as in some folk stories. Hiking to the top might look impossible on the first look, but there are two fairly easy hiking paths leading to the highest peak. There you can find the final resting place of Hjörleifur Hróðmarsson, blood brother of Iceland’s first settler, Ingólfur Arnarson. Close to the edge of the cliff you can also find remains of a farm, which was settled until 1936.  Hjörleifshöfði is one of the places that is believed to be inhabited by the hidden people (elves).

At the foot of the eastern side of the mountain you can find a relatively big cave called Gýgagjá, also known as Yoda cave. You will understand the cave’s nickname right after you look at the entrance from inside of the cavern.