Svínafellsjökull is one of the best known glaciers in Iceland and used to be one of the most visited ones. A few hundred people used to walk on it every day, but now barely a soul steps a foot there. The reason is that the receding glacier has now left an unstable mountainside above it. Which might cause one of the largest rockslides in Iceland for over 10.000 years.

If you are visiting Iceland, chances are that you have heard of a glacier called Svínafellsjökull. Giving it’s breathtaking beauty, closeness to Skaftafell and ease of access, made it one of the most visited ones. Multiple companies used to operate glacier hiking and ice cave tours there and brought hundreds of people there every day. Since reaching Svínafellsjökull was extremely easy, it became quite a popular filming location.

It is probably most known for having been used as “The Ice Planet” in the Hollywood blockbuster Interstellar. It was also used as one of the locations beyond the wall in the TV series Game of Thrones. And millions have seen Christian Bale fall into the ice covered lake in front of the glacier in Batman Begins. We should also not forget that the modern masterpiece Kung Fu Yoga starring Jackie Chan was filmed there as well.

In the fall of 2014 local farmers from Svínafell discovered a fracture in the mountain above the glacier. The fracture is located in the northern side of Svínafellsheiði, in between Skarðatindur and Svarthamrar and is roughly 400 meters above the glacier. When the fracture was formed is not exactly known. It is not visible on satellite images from 2005 but appears in data from 2011, so it’s safe to assume it became visible on the surface in between those years. This fracture was 115 m long and up to 30 cm wide in some places. In 2018, recent aerial photos showed a second fracture in the lower part of Svínafellsheiði. These two fractures combined form a fracture system which is about 1,7 km in total length. Given the size of the fracture, it is estimated that roughly 60-100 million m³ of bedrock is moving and might collapse.

Since the discovery of the fracture, it has been monitored closely. Survey points and GPS stations have been placed to measure any changes in the fracture. 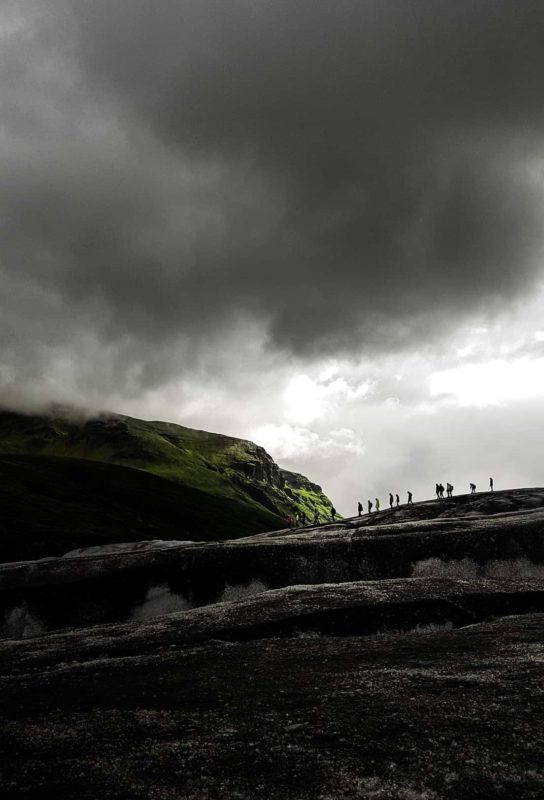 Why Does This Happen?

Global temperatures have been rising since the late 19th century and Iceland is no exception to that. In the last 100 years, temperatures in Iceland have increased by 3.5° C. One of the more noticable effects of the rising temperatures in Iceland is the melting of the outlet glaciers. Flowing down from the larger ice caps, these outlet glaciers often fill up valleys and erode the surrounding mountains. As the glaciers melt and recede they relieve pressure from the mountains, leaving highly unstable mountain sides which increases the likelihood of large rockslides. 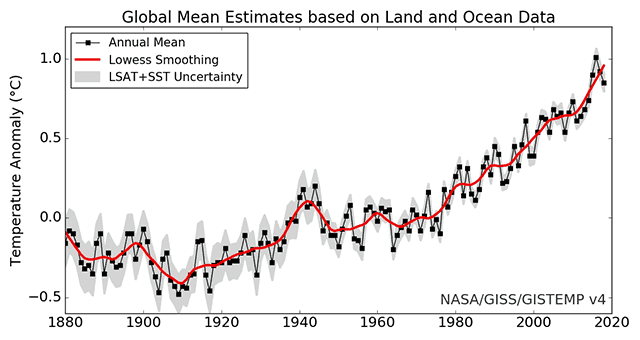 Rockslides have not been so common in Iceland, but have happened once in a while. In the last 60 years two large rockslides have happened around glaciers. In 2007, a large rockslide fell onto Morsárjökull, an outlet glacier close to Skaftafell. The rockslide reached over 1.7km and carried roughly 3.5 million m³of bedrock. This rockslide was contained to the glacier, which is rarely visited by glacier hikers and therefore did not cause any damage.

In 1967 a large rockslide fell onto Steinholtsjökull in the south of Iceland. As the outlet glaciers melt and recede they can form proglacial lakes in front of the glaciers. These lakes can often be hundreds of meters deep and carry enormous amounts of water. The rockslide in 1967 was about 11 million m³ and fell onto Steinholtsjökull and into the glacial lake in front of it. As a result of falling into the glacial lake it caused an immense jökulhlaup(glacial outburst flood) that carried large boulders with it that can be seen from the road leading to Þórsmörk. 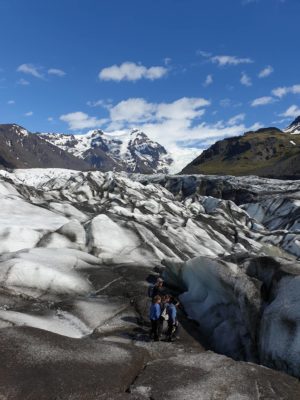 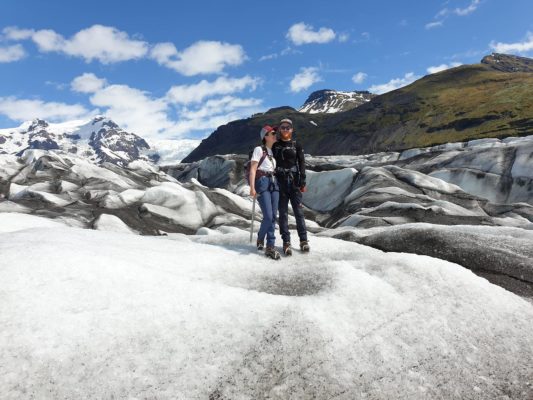 Rockslides In Other Countries

Iceland is far from being the only country in the world having to deal with these types of rockslides. In 2000 a large rockslide fell in Greenland that created a tsunami that leveled an abandoned mining town. An even larger, 90m tsunami destroyed homes and left 4 dead in the small town of Nuugatsiaq in 2017. Even though the glaciers that once formed the fjords of Norway have long disappeared, they have left behind unstable mountainsides. Some of the worst natural disasters in Norway have been caused by rockslides. Over 130 people died in Loen in 1905 and 1936 and 40 people died in 1934 in Tafjord when a rockslide fell into the fjord, causing a massive tsunami.

A tsunami from a rockfall in Greenland, 2017.

Will This Be More Common?

With the warming climate these types of rockslides will undoubtedly be more common in the future. The glaciers in Iceland keep melting at an alarming rate and 2019 was the worst year for them for over 3 decades. As the glaciers melt away the glacial lakes get larger and the mountainsides become more exposed and unstable. As things are going now it is expected that all the glaciers in Iceland will have completely melted away in 100-150 years, leaving behind unstable and dangerous mountainsides.

What Does This Mean For Svínafellsjökull?

This rockslide will eventually fall onto Svínafellsjökull. Whether that is going to happen next month or sometime in the next hundred years. If it will fall in one piece or many smaller pieces, nobody knows. What is known is that this could become one of the largest rockslides in Iceland for over 10.000 years. These 60-100 million m³ of bedrock would likely cover large parts of the glacier and even reach the immensely deep glacial lake in front of it. Reaching the glacial lake could create a massive jökulhlaup (glacial flood) that could even reach as far as the ring road and neighbouring buildings.

In June 2018, Civil Protections advised against travelling on Svínafellsjökull and all tour operators moved their glacier tours to neighbouring glaciers. Travellers have also been advised to not stop for too long at the viewpoints at the glacier tongue. It is highly unlikely that this warning will ever be lifted and glacier tours will resume on Svínafellsjökull. So for now, we will continue operating all of our glacier tours on other glaciers in the area. 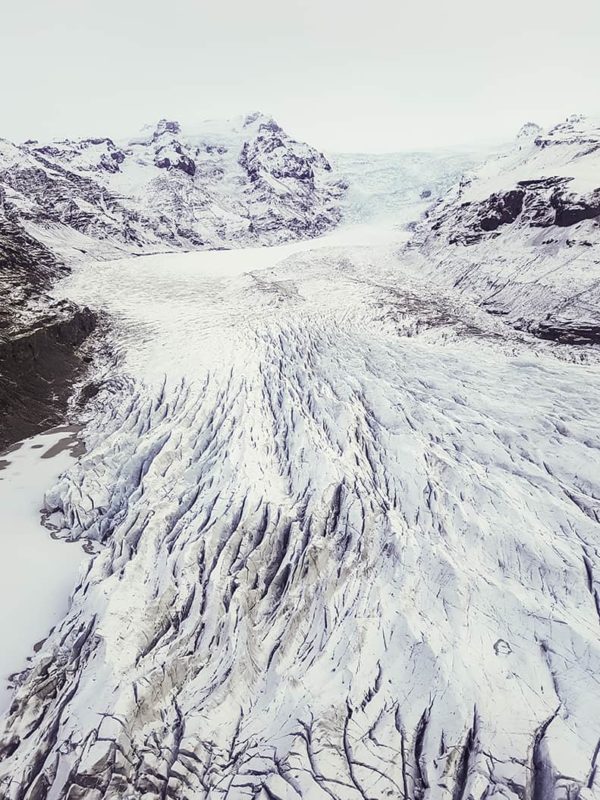